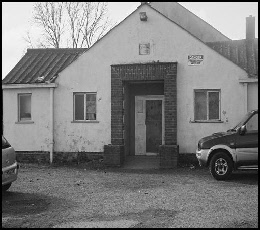 The First Memorial Hall was opened in July 1961 after 15 years of hard work fundraising.

The pressure to book for a large variety of would-be users meant that the enthusiasm of the local residents, backed by the generosity of John Watts a local industrialist produced in a very few years an annex for the main building.

After some forty years the hall had clearly run its life cycle. The annual cost of repair and maintenance plus the cost of heating the outdated building together with diminishing bookings of (by then) an unattractive hall, signaled closure.

The enormous efforts of some of the hall committee and a number of dedicated regular users continued to keep the hall in a functional condition from a safety and security point of view, but this could not be sustained for long.

After twenty years the annex, which had the structure of a temporary felt roofed building, was showing serious structural faults and becoming unusable and was demolished a decade later. By 1990 the costs of maintenance and the reduced hire income, of the main hall, made gloomy reading for the Treasurer’s report at each AGM.  In the following decade, several attempts were made for a Lottery Fund grant, though these failed, a small grant prolonged the life of the old building with a new central heating system. This was only able to achieve a respectable standard at the cost of a phenomenal fuel bill.

The first of the new plans for the hall involved encasing the old buildings with a cavity wall, re-roofing, and bringing up to date certain facilities required by the building regulations. When cost, the ideas proved too expensive,  a rebuild was likely to be cheaper. By 2001 a new source of funding was investigated. Early approaches were made to the District Council agency Forest of Dean Housing. The idea involved the sale on a very long lease of Trust land which might cover the cost of a replacement hall. The sold land would provide a site for new (affordable) houses and flats.

Discussion and plans for the new scheme followed, but always the cost seemed to outweigh the funding.

By trimming the size of the new hall the gap slowly closed, but the tale became a cliffhanger because as the scheme evolved deadlines appeared and firm decisions had to be made.

It was imperative to be certain that the whole project once started would be completed. This meant that the gap in total funding had to be covered before any firm contracts were made.

Grants, donations, and reserve funds were not enough. Knowing that the Village Appraisal was in favor of a new hall, it was suggested at Parish Council that as part of its responsibilities, a support grant covering the remaining gap in funds should be agreed. Without such a  grant there would shortly be no village hall A  public meeting was held in January 2005, the hall packed to the doors.

Even then there were last-minute snags. Too many authorities required assurance before signing. The bank, for example, would not agree to a loan without evidence that all agreements were in place, and Forest of Dean Housing could not agree to sign until the money to complete the whole project was settled. Also they had to have agreement in place before the end of March, or Government funding would be withdrawn and the whole scheme is scrapped. In the end, a private guarantee was offered to cover the current expense, thus enabling the bank loan. The legal department of the District Council (which with staffing problems had been dragging behind) came in at the last moment and the deal was confirmed.

Site clearance was complete by May 2005, building commenced late in June.

A timely bonus was nearly £50,000 from BIFFAWARD grants for sports facilities from landfill tax. This allowed building of the changing and shower rooms at the end of the hall. To have left this for later might well have meant – never. This is the most important extra facility for the new Centre.

As the Parish Council Chairman was pleased to announce at the Annual Parish Meeting, though the shower facilities need to be fitted out, the whole building was completed on time and within the expected cost. At this stage, it may be possible to clear the hall debt within the seven years so making it possible to reduce the support grant before the end of that period.

The new Memorial Hall and Community Centre were officially opened at two o’clock on Monday, May 1st, 2006, by Stuart Jardine the winner of the draw from the “Buy a Brick” fundraising campaign. This was also the start of the May Day Carnival, Fun Run and Fair, one of the major fundraising events in the year for Woolaston’s Memorial Hall.